We have the technology... what we need is the money to build it

We know the energy transition is on - the power system of the future will need to be two to five times larger than what we have now when we electrify homes, transport, buildings and industry. That is a huge investment opportunity 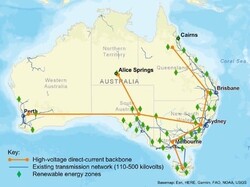 The cost of the transition from the dirty grid we have now to the clean grid of the future is approximately $300 billion. Money that can be invested for this work can come from Superannuation funds, government, and private sources. Currently there is approximately $3 trillion dollars in Australian Superannuation - if 10% was invested in projects to transition to a clean grid, it would be enough to fund all the work.

Investment in the power grid is low risk because the production is predictable, and the consumption of power can be sold in long term contracts. The coal generation we have now is getting old and will need to be replaced.

​Currently Superannuation funds are not allowed to invest in the clean energy transition to the extent that is needed. This is
because the federal government has classified investment in renewables as a risk.

Addressing the risks and changing the investment rules would allow superannuation money to be invested, resulting in: